Over the last few decades, China has gained a reputation for being one of the most polluted countries in the world. Yet, it hasn’t been in the top five since 2016. Indeed, air pollution is a challenge for China, but the country has made remarkable progress in reducing its pollution in recent years thanks to a series of decisive actions taken after intense public scrutiny.

Public concern about worsening air pollution began mounting in the late 1990s. In 2007, Ma Jun, director of China’s path breaking environmental NGO, the Institute of Public & Environmental Affairs, released the China Air Pollution Map, a tool that allowed users to view air quality data from around the country. Beginning in 2008, the U.S. embassy in Beijing began publicly posting readings from its own air quality monitor on Twitter and the State Department website, which residents quickly pointed out conflicted with the level of air quality reported by the city government. By 2012, the U.S. consulates in Guangzhou and Shanghai also had set up their own pollution monitors and began reporting data.

Then, in the summer of 2013, EPIC Director Michael Greenstone and three co-authors published a study in the Proceedings of the National Academy of Sciences that found high air pollution had cut the lifespans of people living in northern China short by about five years compared to those living in the south. The clear demonstration of the health impacts further galvanized public scrutiny and drew the attention of the environment ministry.

Soon after, reports began to circulate of foreigners leaving the country due to health concerns, just as China experienced some of its highest concentrations of fine particulate matter pollution (PM2.5) on record with little reason to believe conditions would ever improve. In the country’s capital city of Beijing in 2013, for example, the average PM2.5 concentration was seventeen times the amount the World Health Organization (WHO) considers safe, and 2.4 times the country’s own Class 2  national standard. In January of 2014, pollution monitor readings reached 30 to 45 times recommended daily levels, and city officials warned residents to stay indoors. Similarly, in Shanghai, the annual average concentration was 9.1 times the WHO standard. Across the entire Chinese population, the average resident was exposed to a PM2.5 concentration of 52.4 µg/m³, which corresponds to a decline in life expectancy by 4.6 years.

“The average resident was exposed to a PM2.5 concentration of 52.4 µg/m³, which corresponds to a decline in life expectancy by 4.6 years.”

Amid one of the worst stretches of air pollution in modern Chinese history, Premier Li Keqiang declared a “war against pollution” at the beginning of 2014 during the opening of China’s annual meeting of the National People’s Congress. The timing of the declaration—at the kickoff of a nationally televised conference typically reserved for discussing key economic targets—marked an important shift in the country’s long-standing policy of prioritizing economic growth over concerns about environmental protection. It also marked an important change in the government’s official rhetoric about the country’s air quality. In the past, state media had deflected concerns about air quality by claiming poor visibility was due to “fog” and that emissions had no effect on levels of smog. Now, the government stressed environmental responsibility, stating the country could not “pollute now and clean up later” and would fight pollution with “an iron fist.”

The declaration followed the release just months earlier of the National Air Quality Action Plan, which laid out specific targets to improve air quality by the end of 2017. The Plan set aside $270 billion, and the Beijing city government set aside an additional $120 billion, to reduce ambient air pollution. Across all urban areas, the Plan aimed to reduce PM10 by at least 10 percent relative to 2012 levels. The most heavily-polluted areas in the country were given specific targets:

The government’s strategies for achieving these goals included:

The Chinese government’s air pollution reduction strategies have largely allowed the country to win its war against pollution. Between 2013 and 2020, particulate pollution exposure declined by an average of 39.6 percent across the Chinese population. If that reduction is sustained, it would equate to a gain in average life expectancy of 2 years. To place China’s success impact into context, the reductions in pollution account for all of the global average decline since 2013. China was among the five most polluted countries in the world each year from 1998 to 2019 but fell out of the top five in 2020. The Beijing-Tianjin-Hebei area, one of China’s most polluted areas in 2013, saw a 48.8 percent reduction in particulate pollution, translating to a gain of 4.1 years of life expectancy for its 108 million residents, if sustained.

To put the scale and speed of China’s progress into context, it’s useful to compare it to the United States and Europe after their periods of industrialization. In the United States, following the passage of the Clean Air Act, it took almost three decades and five recessions to achieve about the same percent decline. In Europe, after their environment agency was created, it took about two decades and two recessions to achieve approximately China’s percent reduction.

Though China has made impressive progress, pollution does remain a challenge. The average particulate pollution concentration in 2020 was still more than 6.3 times the WHO guideline. More than a third of China’ population, 37.9 percent, still lives in areas where the pollution levels don’t even comply with the country’s own national standard. Reducing pollution to meet the WHO guideline would mean an additional increase in life expectancy for the Chinese people of 2.6 years. In Hebei and Henan provinces, home to much of the country’s coal and steel industries, residents could see their average life expectancies rise by almost 4 years if pollution declined to the WHO guideline.

To this point, China has relied on command-and-control measures to swiftly reduce pollution. While the measures have worked, they have come with significant economic and social costs. As China now enters the next phase of its “war against pollution,” the long-run durability of its actions will be enhanced by minimizing the costs. Relying on market-based approaches (e.g. an emissions trading scheme) is a possible solution that can effectively and inexpensively reduce pollution. 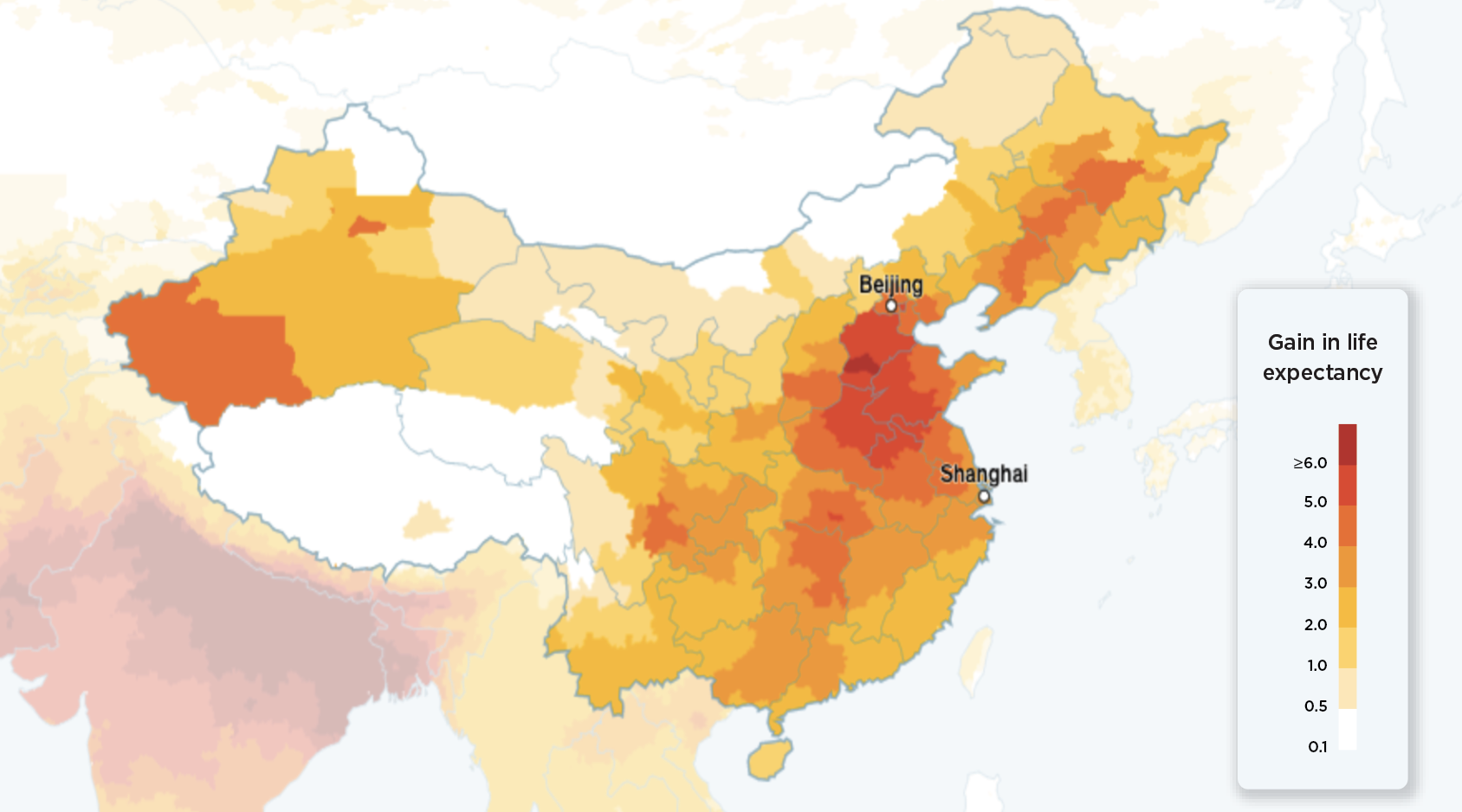