Pollution is down 57 percent in the city once renamed “Makesicko City.” The ProAire policies have allowed residents to live more than two years longer.

In the 1980’s, the pollution in Mexico City was so bad birds were reportedly falling dead from the sky mid-flight. Locals said living there was like smoking two packs of cigarettes a day. Even on a clear day it was difficult to simply see across the street. “You can see it, feel it, taste it, brush it off your clothes and out of the dog’s fur,” according to one report.

The pollution was the result of decades of industrialization that began in the 1940’s. In that time, Mexico City had become home to millions of vehicles without pollution controls, running on toxin- and pollutant-laden fuel, as well as highly-polluting oil refineries, power plants and factories. Furthermore, its elevated basin topography and weather patterns meant that these pollutants would be trapped in the metropolitan area.

Despite reports of increased asthma attacks, cancer and neuropsychological disorders, the government’s focus remained on employment and living standards. But public outcry began to grow. Their concern materialized by the writer Carlos Fuentes who renamed the city “Makesicko City” in his novel. U.S. diplomats serving in Mexico City were allowed to retire two years earlier for every year they served there, in compensation for the health effects.

In 1992, the United Nations declared Mexico City the most polluted city on Earth. By that point, the government had begun to implement policies to confront it, beginning with the Comprehensive Program Against Air Pollution (PICCA) in 1990. PICCA required new vehicles to include catalytic converters, introduced unleaded gasoline, and established vehicle emissions standards.

ProAire III, the third phase of policy, ran from 2002-2010 and called for $12-$15 billion in public and private funding. The more than 80 initiatives under ProAire III included closing the most polluting industrial facilities and improving public transportation to decrease vehicle emissions. This included:

Not all of the reforms have come without controversy. For example, one of the city’s major reforms was to implement “Hoy No Circula.” Under this program, on each day of the week cars with certain license plate numbers are restricted from being on the road according to whether they end in an odd or even number. There is evidence, however, that to circumvent the restrictions, residents simply purchased second cars or took taxis on no-drive days—leaving some economists to believe that the program did not contribute to improved air quality.

Though the impact of the policies on air quality is still a subject of debate, the data from Mexico City’s monitors show particulate pollution has declined by 57% since the introduction of the 1990 ProAire policies—allowing residents to live more than two years longer. [1]  Concentrations of other pollutants likewise decreased dramatically. Much of the reductions in air pollution happened before the mid-2000s. Once the lowest-hanging fruit—the easiest pollution to reduce—had been picked, pollution levels stagnated. Since 2014, particulate pollution has been climbing again.

The AQLI estimates that from 1998-2016, the period spanned by the AQLI’s data, the net gain in life expectancy due to the change in PM pollution was 1.6 years. If the AQLI’s data covered back to 1990, when ProAire was first implemented, we would find an even larger gain in life expectancy, since pollution reductions are quickest when they first begin.

Moving forward, transportation remains the largest source of pollution. Mexico City is a sprawling metropolis, where pollution-emitting commutes can take three hours. Urban restructuring, which would strike at the root of the problem, is financially and practically difficult.  Further, pollution policies must not only tackle existing pollution, but also keep up with the city’s rapid growth, lending another challenge to regulators. 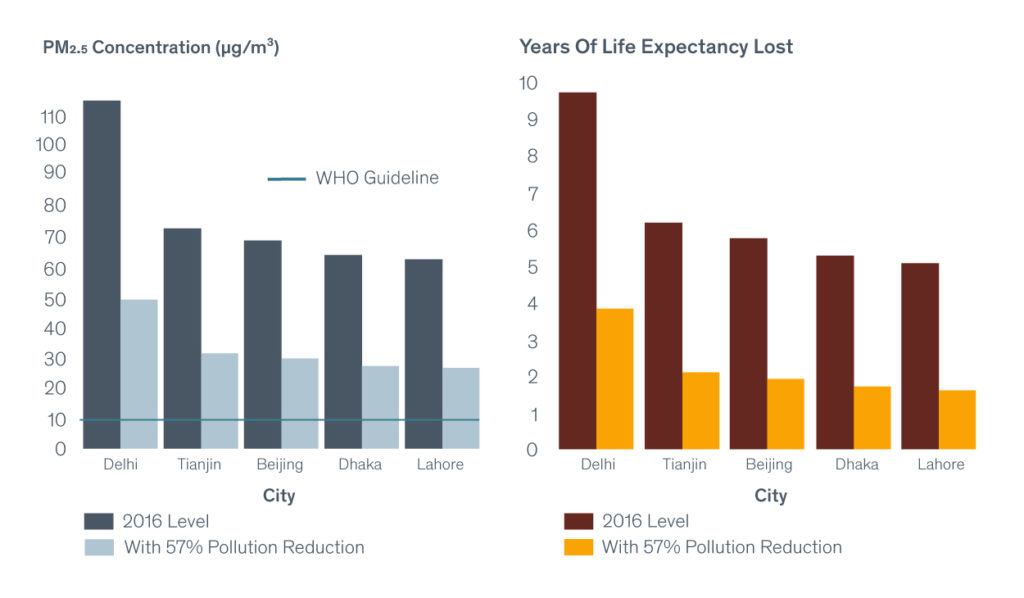 [1] To have data dating as far back as 1990, this page uses the Mexico City government’s ground-level monitor data, which differs from the satellite-derived data used in the AQLI map tool. Since PM2.5 was not monitored until 2003 whereas PM10 has been monitored since 1990, as in the Clean Air Act Policy Impact page, we proceed with the assumption that the PM2.5/PM10 ratio is constant over time at any given location. At the four monitors in Mexico City that have measured PM10 throughout the period 1990-2017 (La Merced, Pedregal, Tlalnepantla, and Xalostoc), on average, PM10 has been reduced by 57% over these years.